In the late 1970s professional leaders in the American Baptist Church of Fort Collins heard of a new concept of daycare for adults being practiced on the western and eastern coasts, but not in the Rocky Mountains and midlands.  The church began research through national adult daycare services, then Colorado State University, the local Office on Aging, and gave attention to needs in the local community.   One member of the congregation and professional teacher, Betty Moseley provided many days and hours researching the concepts, issues, and possibilities of meeting the needs of adults in the Fort Collins community and beyond.

Professional leaders in the church, former president of the University of the Philippines, Dr. Fred Chambers, and his wife and surgeon Dr. Dorothy Chambers who had established a new hospital in Assam, northeast India inquired of Dorothy’s sister in Seattle, about a late new concept of daycare for adults already established on the west coast and east coast to discover success was already apparent for such a new venture of service.

Under the pastorate of Dr. Donald W. Lambert the church formally adopted the new mission concept and voted to release church properties across Shields Street for the birthplace of Elderhaus.  On the first day alone the congregation provided 74 volunteers to upgrade and insulate the properties for the new venture of community service, the first of its kind in the Rocky Mountain region.   Many other church members volunteered to serve Elderhaus with music, games, and built a new outdoor picnic shelter. Nearby communities soon came to copy similar ventures in their own cities.

Local attorney, veteran and church member, Joe Mears became the first president of the Elderhaus board of leaders.   Methodist minister, Rev. Frances Bigelow served as the first Director, while Shirley Taladay served as the first nurse, and other leaders, all without pay served as leaders of Elderhaus in its beginning stages.  In 1980 the church provided total funding for the program and has continued its funding and services to the present day.

At the end of 1980 there were four part-time participants and at the end of 1981 there were 15 near-fulltime participants, while staff soon became paid, and a program director was secured.  Fort Collins community churches and Fort Collins Interfaith assisted in promotion and publicizing of Elderhaus to the wider community and the city of Loveland.  Vans began to provide transportation to the Shields Street properties, and were used for day outings for participants.  These were the formative years. 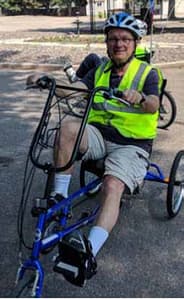